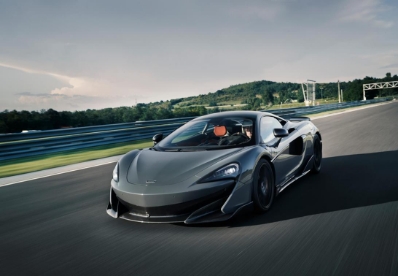 McLaren takes great pride in its motor-racing heritage, which comprises not only Formula 1 but… also the famed 24 Hours of Le Mans – and it’s this race that provided the inspiration for the new 600LT.
The McLaren 600LT has been named an All-Star award winner by AUTOMOBILE, a leading automotive lifestyle brand and magazine. Built to excel on both the track and road, the 600LT is the most powerful and most track-focused, road-legal McLaren Sports Series yet– and it follows in the footsteps of its Super Series stablemate, the McLaren 720S, which was voted an AUTOMOBILE All-Star in 2018.

“The 600LT is further confirmation of what we already knew: McLaren continues to build immensely capable, astonishingly drivable machines that we can’t help but name All-Stars,” said AUTOMOBILE editor-in-chief, Mike Floyd. “To think of how far McLaren Automotive has come in less than a decade is as mind-bending as the performance envelope of its supercars.”

As the first ever “Longtail” in the Sports Series line up, the 600LT features increased power, reduced weight, optimized aerodynamics, absolute driver engagement, track focused dynamics and limited availability – all hallmark traits of the “Longtail” moniker. A 3.8-liter twin-turbocharged V8 produces 592bhp and 457lb ft of torque for 0-60mph acceleration in a blistering 2.8 seconds. The 600LT is 219.1lbs* lighter than the 570S, with nearly a quarter of parts new, including the top-exit exhaust, which significantly contributes to weight savings. The 600LT also features new aerodynamic carbon fibre bodywork, including front splitter, side sills, extended diffuser and fixed rear wing – which contribute to 220.5lbs of downforce at 155mph.

The AUTOMOBILE All-Star award is not the first accolade for the McLaren Sports Series in 2019– NOBLEMAN, a premier American men’s ultra-luxury magazine, also named the 600LT its “Best Car of the Track.” Not to be left out, the 570S has also received its own share of praise this year – Esquire named the 570S Spider “Performance Car of the Year,” while the Chicago News Group named the 570S its “Sports Car of the Year.” Car and Driver also named both the 570S and 570GT an “Editor’s Choice.”

“It’s a true honor anytime a McLaren model receives an award, and its particularly special to have every model variant in our Sports Series line up –the McLaren 600LT, 570S and 570S Spider —receive accolades by such prestigious, national outlets. It’s a true testament to what the McLaren brand has become, and we are looking forward to another record-breaking year in 2019—we’re already off to a strong start,” said Tony Joseph, President, McLaren North America.