Aerodynamic stability. Instant responses. You see it in the stance – 5mm lower at the front. In the widened front track. The dramatic side air intakes inspired by the rule breakingprodigious McLaren 675LT. In profile, its elongated rear tells you that this is an LT to the core. The new active rear wing wing is a carbon fibre masterwork. Created at the McLaren Composite Technology Centre (MCTC), it generates huge downforce for ultimate stability and super-short stopping distances. Bespoke carbon fibre body panels create a unique and thrilling silhouette. While a new active rear wing defines the Longtail profile. It boldly signals the rarity and extreme character of the 765LT. But as ever, form strictly follows function. This ingenious feat of engineering from the McLaren Composites Technology Centre (MCTC) maximises downforce and decreases stopping distances. The lowered front suspension and widened front track add menace and poise while ensuring extra sensory handling on road and track. Look at the 765LT and you’ll know. From its aggressive new facial signature. To that extended active rear wing. This is a whole new chapter… in a story of relentless performance. 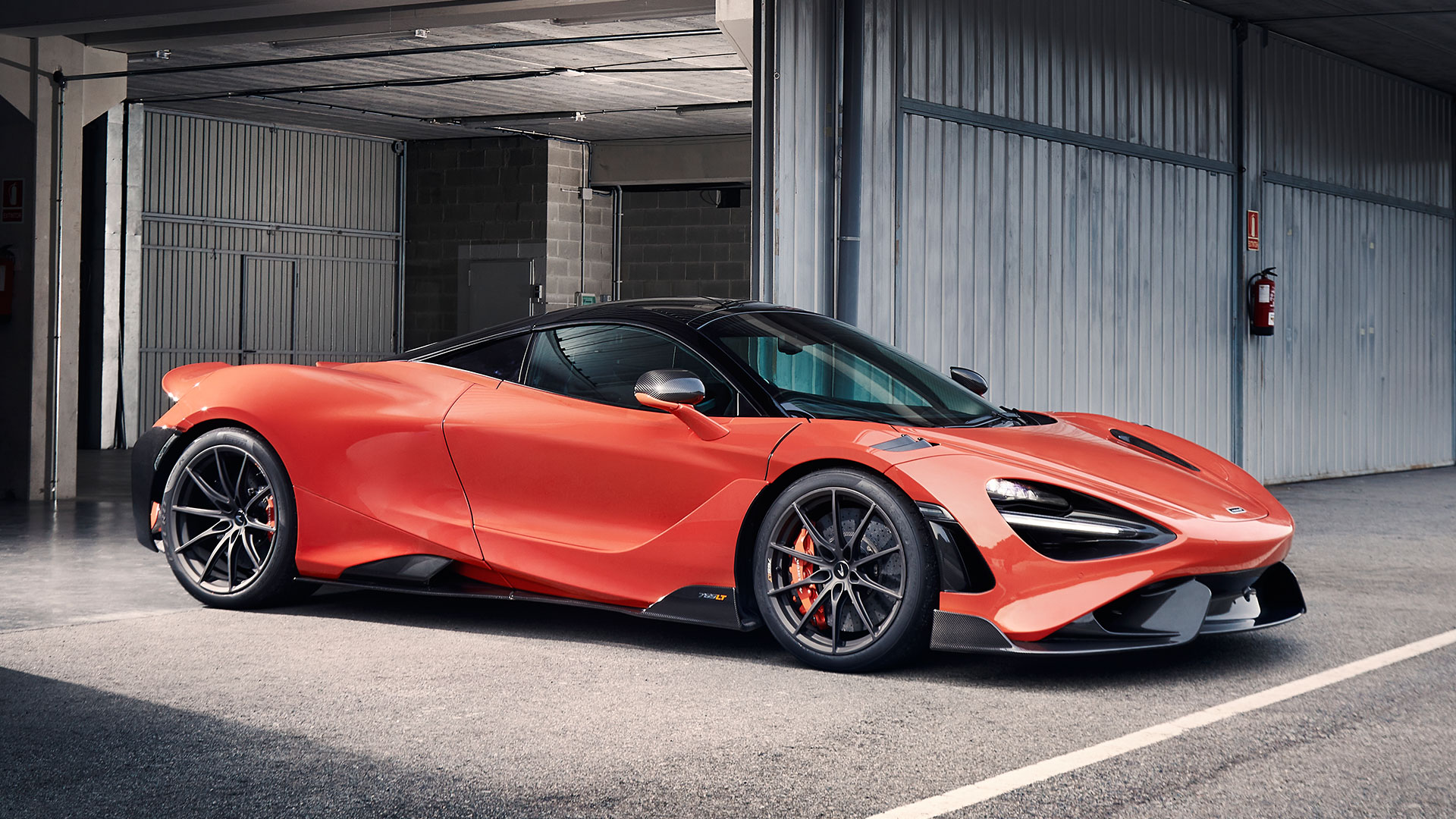 Where, when and how you want it. So every last drop of the 765PS available can be put to thrilling good use. This attention-grabbing power comes from a re-engineered version of the the same hardcore 4.0 litre twin-turbocharged V8 that propels the McLaren 720S. But here it Designed with a range of updates that generates an extra 45PS. And a phenomenal 800Nm of torque. Optimised gear ratios, with a unique and shorter final drive ratio created from Formula 1 grade materials, adds an even more savage edge to acceleration. While McLaren Senna engine technology and uprated high-flow fuel and oil systems, unleash the inner LT. 765PS. Enough power to change the game. To make history. Because the 765LT is the most powerful LT model ever. It raises the bar. And rewrites the rules. The McLaren -designed 4.0 litre twin-turbocharged V8 produces 45PS more than the mighty 720S. hared DNA. It makes every McLaren special. Unmistakable. The volcanic engine at the heart of the 765LT is living, breathing proof. It’s fundamentally the same world-beating powerhouse you’ll find in the 720S. Enhanced with LT engineering… The result is a howling, thrilling 4.0 litre twin-turbocharged V8 that redefines performance and responsiveness on road or track. 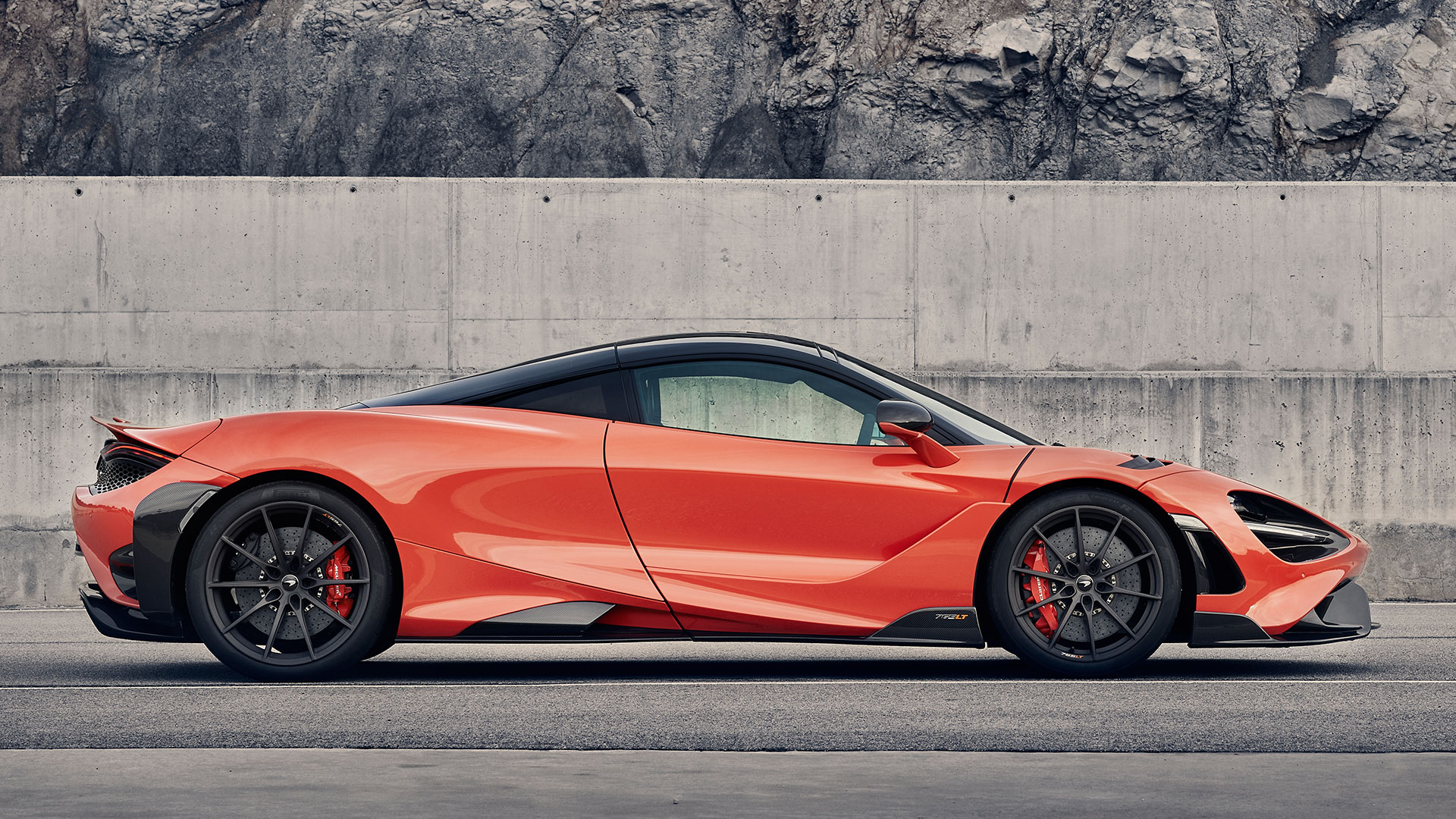 Your senses are treated to an intense, unfettered flow of information. From everywhere. The show stopping all-titanium quad-exit exhaust howls at higher revs. It’s unique and unforgettable. Stiffer engine mounts and polycarbonate glazing allow extra engine sound into the cabin. The trademark McLaren electro-hydraulic steering is sensitive and full of feel because of a quicker rack and stiffened steering torsion bar. On every corner, camber and surface, the specially developed Pirelli P Zero™ Trofeo tyres allow you to explore cornering speeds beyond the conventional limits. Underpinning everything is the highly advanced ProActive Chassis Control II system, with software and hardware updates designed to handle the outer limits. And engage with the driver more vividly. More clearly... The line between instinct and engineering blurred beyond recognition. Every great engine has an unmistakable voice. It speaks volumes for pedigree and performance. Setting this voice free takes a boldly designed, beautifully engineered exhaust. The quad-exit full-titanium exhaust system in the 765LT is dramatic and exquisitely formed. Delivering a thrilling mix of searing soundtrack, visual drama and functional lightness. It’s a work of art. Made entirely from titanium. 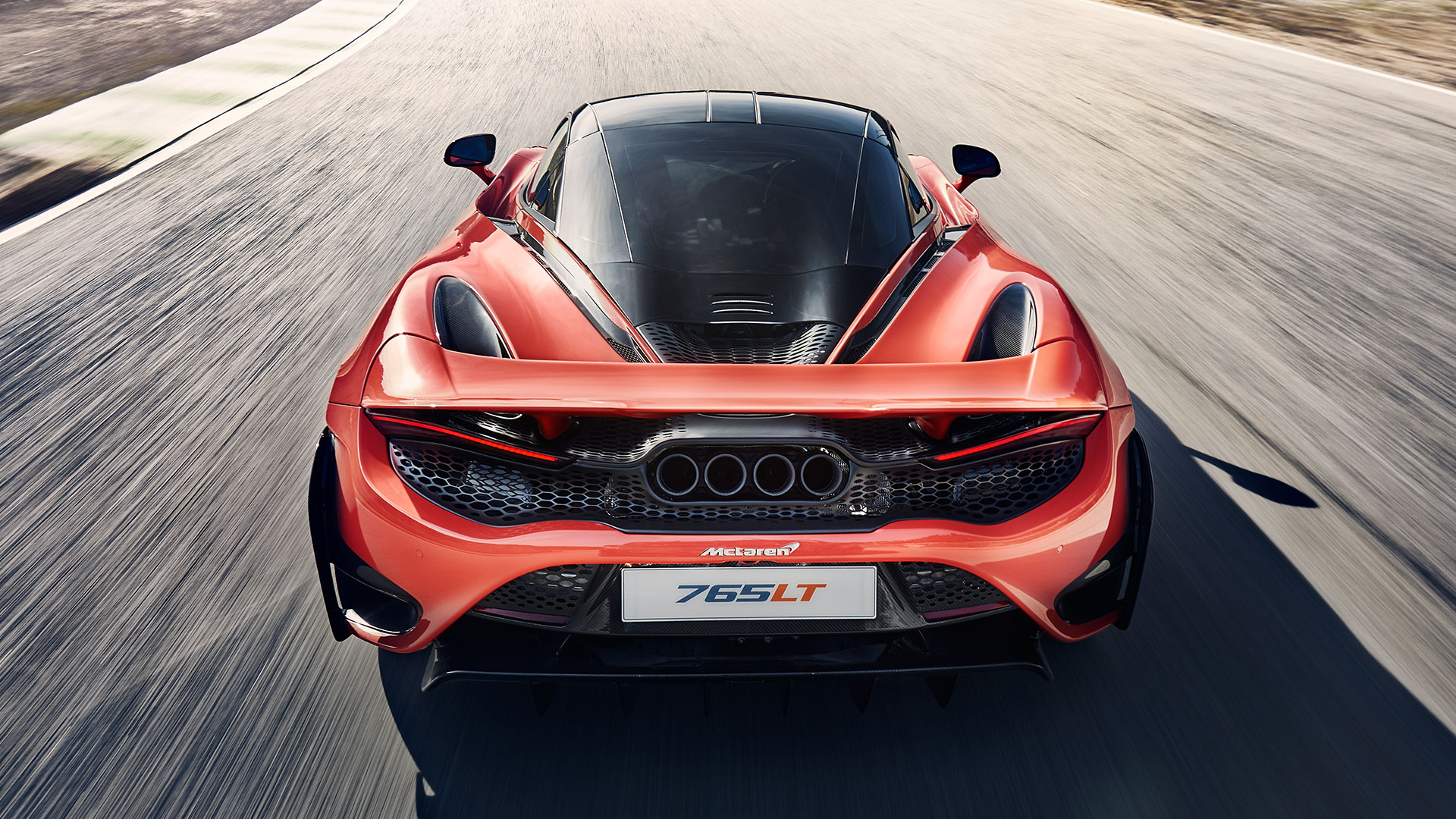 Every Longtail is shaped by the spirit of rebellion. An obsession with going faster. Being better. Questioning everything and refusing to compromise. This extreme ethos inspires the design of the 765LT in every way. It’s all about purposeful aggression. You sense it in the elongated profile and lower stance. You see it in every beautifully engineered detail. Like the newly designed front splitter and bold side air intakes that invoke the legendary 675LT. A McLaren Senna-inspired carbon fibre front licence plate plinth celebrates McLaren motorsport DNA and total performance focus. Audacious attitude and functional quality also make the interior unique. Track ready and dramatically minimal, it surrounds you in lightweight Alcantara®. Deeply sculpted racing seats based on those found in the McLaren P1™ place you perfectly. A unique carbon fibre tunnel flows through the centre of the cabin. 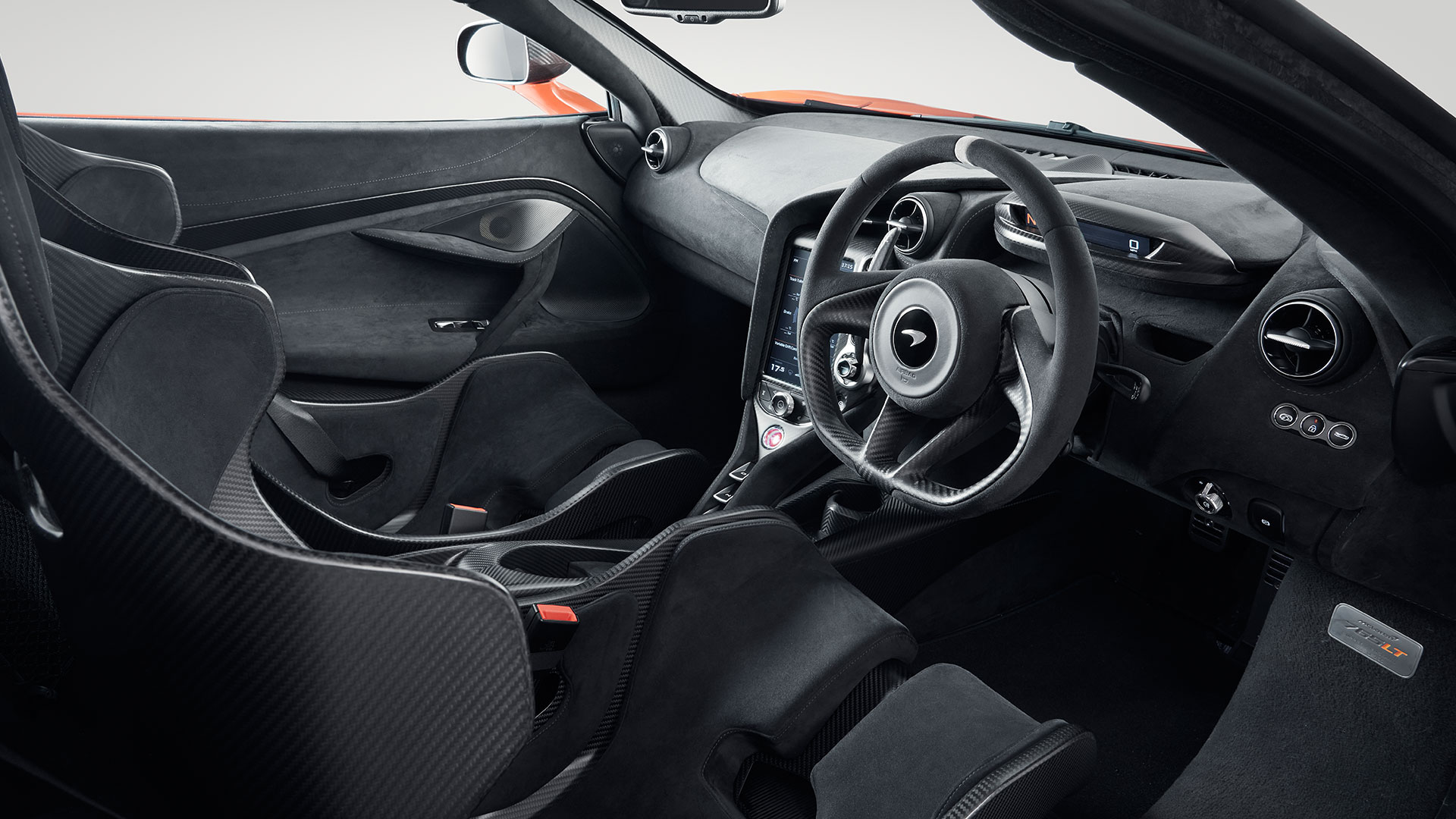 McLaren does not fear the unknown or the challenge. The new McLaren 765LT has a legend to live up to: Longtail. Every car that’s carried this name has been unique. Extreme and utterly focused around the driver. All about maximum engagement. Searing performance. Sensational handling. Being based on the incredible 720S, the latest LT has everything in its favour. A flying start. And it delivers on every level. Radically lightened and lower, the 765LT uses innovative aerodynamics to create 25% more downforce than the 720S. 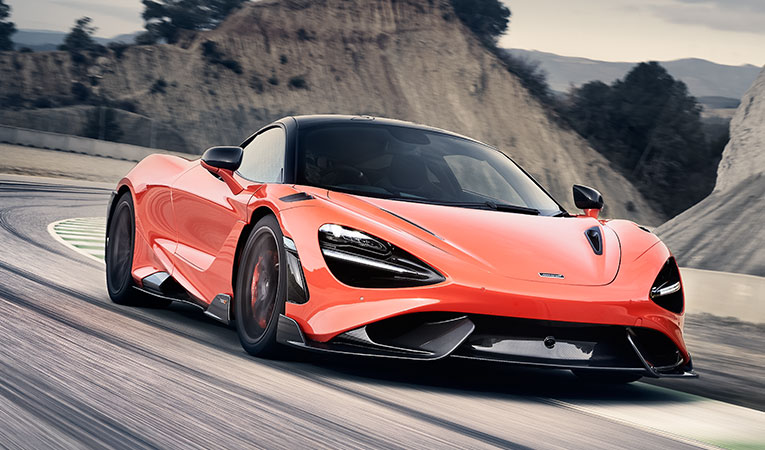 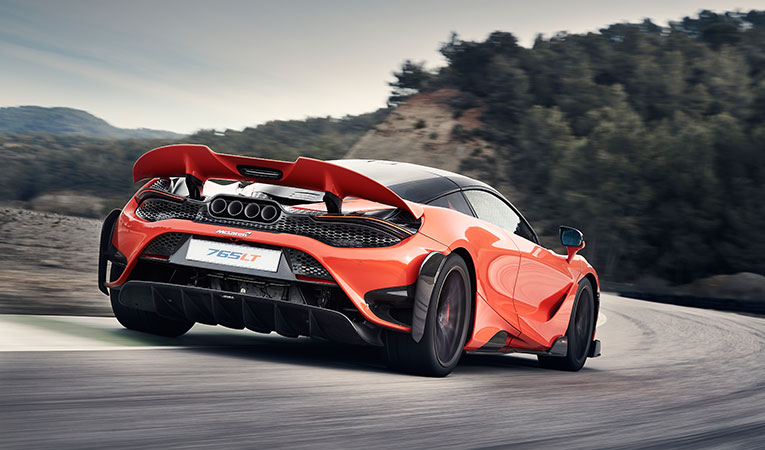